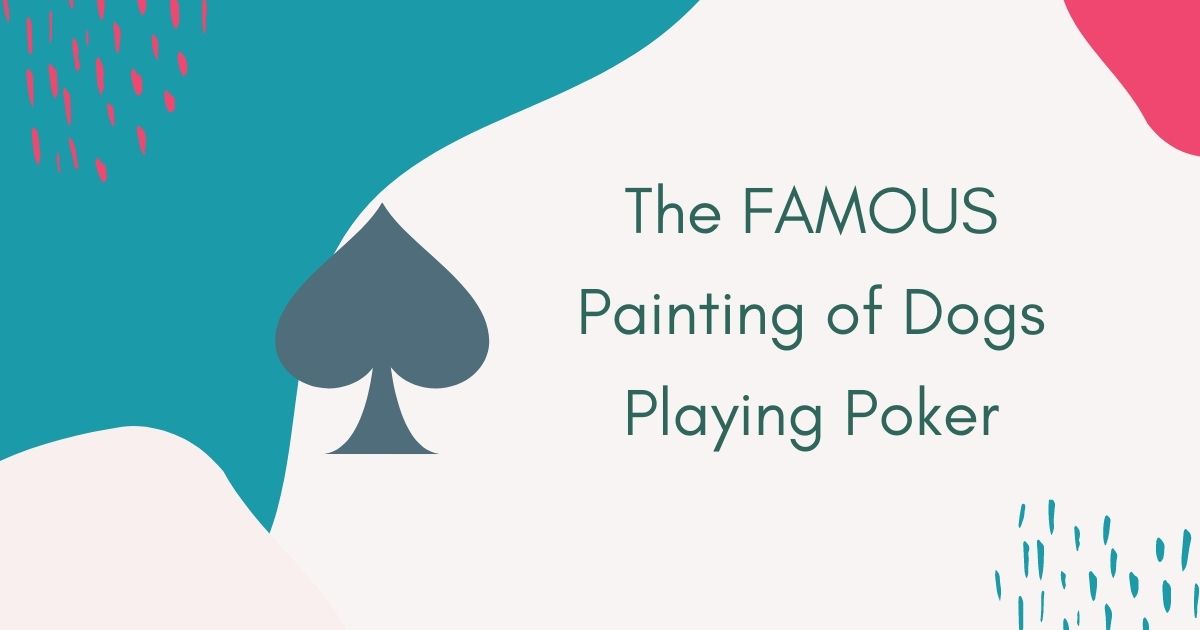 Dogs remain man’s best friends. As a reward from men, they appear in movies and paintings, such as the famous painting of dogs playing poker. Such a painting is a token of appreciation for dogs for being pets that sometimes remain loyal to their master until death.

Talking about paintings, let us delve into the poker dogs painting. How much do you know about it? For more information, let us indulge you with it.

Have You Ever Seen Dogs Playing Poker?

Who is the artist behind the famous painting of “dogs playing poker”? It was Cassius Marcellus Coolidge. His main motive was to capture the attention of his audience. True to his mission, the paintings won the hearts of millions of Americans. As a result, they became a staple art in the country.

Subsequently, the famous paintings of dogs have appeared on several platforms to capture the attention of the respective intended audience. The following are some of the instances that featured the pieces:

If we could list the instances featuring a dog poker painting, the list is endless. But, if you have never seen one, you shall see one in the future. Film and show producers are still in love with the paintings. So, be on the lookout!

Who is Cassius Marcellus Coolidge?

Cassius Marcellus Coolidge is an American artist born on September 18, 1844, in Antwerp, New York. He rose to fame for his Dogs Playing Poker series of paintings. Coolidge did several jobs, including being a sign painter and pharmacist, before taking the painting career. He was also a newspaper and a bank founder.

Coolidge did not train as an artist. However, he was an art lover. In his twenties, he worked as a children’s books cartoonist. A newspaper also featured some of his works at one point.

Coolidge also had a playful art style. He was one of the inventors of comic foregrounds. In this type of art, a person had to insert their head in a wooden hole. Afterward, Coolidge painted a funny or fantasy character on the wood in front of them. The main idea was to create novelty portraits.

The parents of Coolidge were abolitionist Quaker farmers. His family knew him as Kash or Cash. He used the name Kash to patent his nineteenth-century artwork. Sometimes, he would sign his work comically using the name Kash Koolidge.

Did you know that Coolidge’s paintings are some of the artworks with the most copies? This is because their amusing depictions make them fit in several art genres and locations. Also, most of the paintings fit well with the casino culture. So, there is a high probability of finding some of them in your local casinos.

A Friend in Need

Perhaps, this is the most famous piece among the famous dog paintings. In this painting, seven dogs are sitting around a table. They are playing poker, and it is in the early hours of the morning. The bulldog on the painting has decided to pass an ace secretly to his friend to help him have four aces. The painting must have derived its title from this action.

Coolidge painted this piece in 1909. Initially, Coolidge had named the painting Judge St. Bernard Stands Pat on Nothing. However, Brown and Bigelow’s marketers renamed it to its current title.

In this painting, one of the dogs, Saint Bernard, holds a cigar in one paw and a set of cards in the other paw. He is staring at a bulldog sitting across the table while some chips lie on the table. All the other dogs are staring back. They are wondering what Bernard holds. Saint Bernard has a pair of deuces only. If the bulldog falls for the bluff, he risks his pile of chips.

This painting marks the end of the saga in A Bold Bluff. Saint Bernard did not stand as a bluff because his deuces won. The other dog folded with a pair of jacks. Saint Bernard seems to have dropped his cigar, and he is busy collecting his winnings with both paws. Other dogs seem to bark in disgust, and one of them has spilled a tumbler of scotch.

His Station and Four Aces

From the painting, a train conductor seems to inform the well-dressed dog passengers that it is time to disembark. Unfortunately, one of the dogs has a small pile of chips and four aces. So, he will not manage to fold. He seems surprised that another dog has already folded and is already leaving. One can also see the train station pooches and lights in the painting.

This painting shows four police dogs raiding an illegal gambling den. A collie tries to make a quick getaway, but he knocks off some chips and a glass of beverage from the table. The other dogs remain seated but surprised. Already, the bulldog has dealt four aces. However, he will not benefit from the rare hand.

The setting of this painting is at the corner of a member restaurant or club. The walls of the club feature pictures of dogs that have probably ever visited the club. From the painting, seven dogs sit facing a bulldog. The bulldog seems shocked after dealing most of his chips and placing his trust in his four aces. However, there is a dog that wins with a straight flush.

The winning dog seems to back viciously to his opponent. His barking makes his opponent jolt off his chair, spill his drink, and drop his cards and cigar. The rest of the dogs are cheering as the drama unfolds.

From the painting, three dogs sit around the table. Perhaps, they are discussing an important issue of the day. It is early in the morning. They seem to have opted to enjoy crackers, cigars, and alcohol instead of playing cards and dealing chips.

Sitting up with a Sick Friend

This painting has a comical element. Two female dogs in hats ambush five male dogs purportedly helping their sick friend. The faces of the male dogs have varied expressions.

One of the male dogs seems to dash after a female dog whacks him with an umbrella. The other dog hides his chips while the next dog pretends to read a book. The last dog seems to have jumped backward to avoid an umbrella lashing from the second female dog.

This painting has fur trappers sited by a campfire. One of the dogs holds four aces on his paw. The next one has a straight flush, and he should be the winner. The third dog has a dropped jaw and wide eyes, denoting a shock. However, the winning dog seems to laugh mockingly, but he cheats because he has a straight flush and four aces.

In the background, there is another dog preparing dinner in an open fire. Raccoon skins lie stretched on tree trunks, and a fishing pole and a rifle lean on one of the tree trunks.

In this 1909-1910 painting, a lone dog seems to be waiting for a poker game. It is smoking a cigar, and more cigars lie on the table. A glass of alcohol is also on the table. Also, it has a newspaper on its lap. The dog seems not to wait for any female dogs. The painting depicts the typical life of a bachelor.

Ten Miles to a Garage

This painting shows a family of dogs heading to a summer picnic. However, their car breaks down on a lonely stretch of road. Their car license plate shows that they are in rural New York. The young pups are in the car while the older ones are repairing it.

However, only one dog is busy repairing the car. One of the other dogs is lying under the shade of the car. The next one sits idly while the last one is smoking a cigarette.

In this 1909-1910 painting, there is a court case about a breach of a marriage promise. It was common for a lawsuit to follow whenever a man seduced a lady and then refused to marry her under civil law. The Boston Terrier appears to be the jilted lover of the bulldog.

The evidence on the floor includes jewelry, letters, and pictures. Also, the puppies on the left could be a fruit of false seduction.

In this painting, several dogs are in a ballroom, dancing. The painting does not feature a poker game, unlike several other paintings in the series. Instead, the dogs seem to be ushering in a New Year.

The couples in the foreground embrace fondly, but the bulldog in the background shows a look of disgust while holding his partner. The band plays lightly, and there are tables full of wine and champagne.

One to Tie Two to Win

This painting shows several dogs in a stadia. They are cheering on a cricket game. Some of the dogs are on the roof of the stadia. All dogs seem rowdy, and some of them are smoking cigars. Inside the stadia field, one of the dogs holds a bat ready to strike.

This painting shows a group of four dogs sitting on a round table. Two bottles of liquor rest on the table and each of the dogs has an almost full glass of alcohol. Two burning cigars are also on the table. Each dog is also holding a smoking pipe. They seem to catch up on past events.

In this painting, a dog clown seems to entertain a royal couple. However, it does not relate to the poker game. Some people associate it with a Masonic Lodge initiation. But they are wrong. The painting may mean a joke between Masonic recruit members and veteran members. Notably, Cash was a Masonic temple member.

Can dogs play poker? Yes, Coolidge made it possible in his paintings. What can we say? It is so sad that these paintings are yet to hang on the walls of notable art institutions. The popularity of the paintings is noticeable. Their cost in auction houses is also something to notice.

Despite the nature of the paintings in the eyes of their critics, Coolidge left a valuable legacy. The thought of dogs that play poker is an artistic concept that will keep the world entertained into an unforeseeable future.