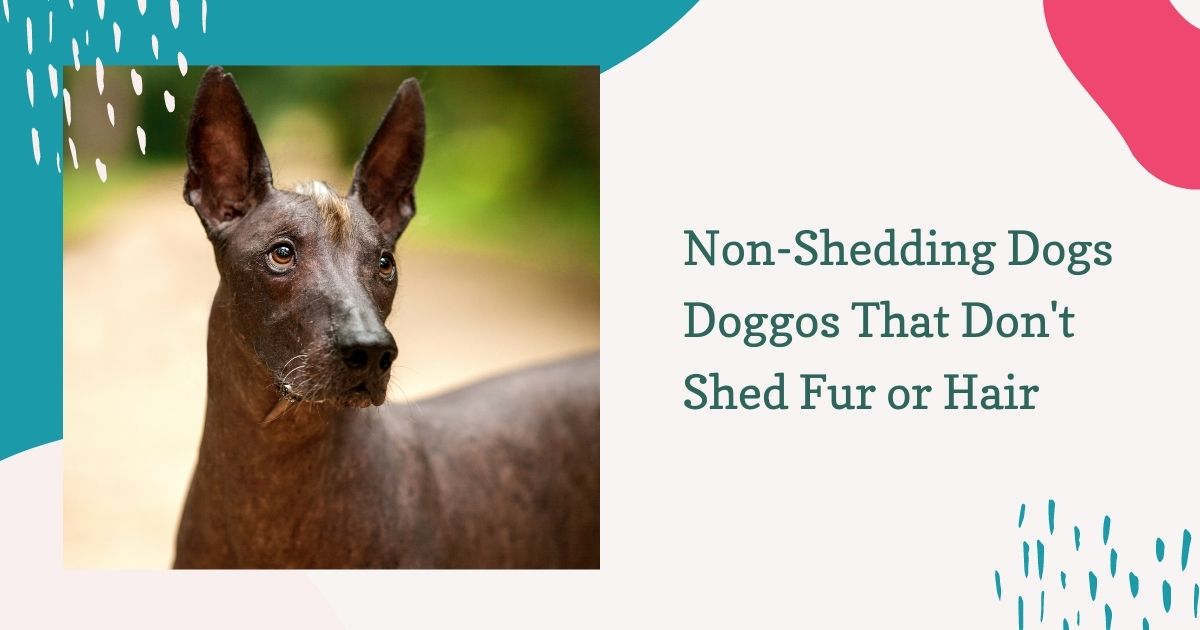 This is our review of non-shedding dogs-doggos that don’t shed fur or hair.

Owning a dog is a great idea. But the tumbleweeds of a dog’s hair can make things uncomfortable. So if you always get an allergic reaction after touching a dog, don’t worry! There are many types of dogs on the market. And among them are non-shedding ones suited for people with allergies.

In our quest to find the best dogs for people with allergies, we found out that the Tibetan Terrier is our favorite choice! This is because It is a loyal, sensitive, and affectionate family dog.

If you are susceptible to specific dog breeds, here is a compilation of the best non-shedding dogs. With this list, you’ll be able to select the one that will not limit you from being a pet owner.

Are You Allergic to Dogs?

If you are allergic to dogs and, at the same time, looking for a canine companion, you might be wondering what breed will fit your needs. Well, different types of non-shedding dogs rarely cause allergic reactions.

Interestingly enough, these dogs don’t shed, have little to no hair, and exhibit single-layered coats. All these characteristics are perfect for you since no dander will float around your home or body.

Signs and Symptoms of Dog Allergies

The signs and symptoms of dog allergies are as follows:

Groomers Land’s Best Tips for Living With Allergies and Canines

Having pet allergies doesn’t mean that you can’t own one. What you don’t know is that it can be comfortable to own one as long as you get the right breed. In order to do this, you need to be conversant with the following tips so that you’ll live a perfect life with your companion.

Seek Advice from an Allergist

After a series of allergic reactions with your little pup, things must have gotten uncomfortable. As a result, the first and most essential thing to do is consult and seek advice from an allergist. First, they will advise you to let the dog go. However, this might be impossible for pet lovers.

For this reason, you might be recommended to use antihistamines to minimize exposure to allergens. While doing this, note that some may work while some may fail to work. Moreover, the allergist might administer vaccines and prescribe certain medicines to help you have a perfect bond with your poodle.

Nothing brings down the allergens stuck in your canine’s fur and skin than proper dog grooming. Regular dog grooming is better since it reduces dander. Additionally, it involves bathing and brushing your dog to remove allergens.

For better results, ensure that you bathe your pet at least once a week to prevent skin-related issues. On top of that, don’t forget to consult with a veterinarian on the type of shampoo. This is because some tend to dry your pet’s fur and cause skin irritation, such as itching. In addition to this, don’t forget to brush your furry friend.

Although it’s an effective method, it can be uncomfortable for the allergic pet owner. Why is it so? Brushing involves the removal of dander which might cause allergic reactions. To protect yourself, let someone else brush the dog while you maintain a far distance.

After brushing, let them smooth down the skin with a moistened towel to remove the reactive molecules. While doing this, ensure that they are using the right brush.

Fur and dander can be a nightmare for many pet owners. The good thing about hard surfaces is that they are not prone to collect a ton of fur. If you can’t get rid of carpets, ensure that you conduct regular vacuuming to reduce the amount of dander. In addition, you can restrict your dogs from entering rooms that have mats or rugs.

Many people spend a substantial amount of time blaming their dogs for being the source of their allergic reactions. What they don’t know is that they have spent the whole day cuddling with other dogs.

So, before blaming your itchy eyes on your four-legged friend, make it a habit to avoid getting into contact with other people’s dogs, as they might not be getting the kind of grooming that your baby gets.

Set Up an Allergy-Free Zone

Air filters play a vital role in every house, especially the ones with dogs. Although they can be expensive, they will reduce the amount of dander in your home.

Dogs enlighten every household due to their cheeky character. But due to allergic reactions, you want a pup that will make you have a perfect time together without falling sick. So to cure your curiosity, here is a list of the 15 best non-shedding dogs and fun facts about them.

Tibetan Terrier is Groomers Land’s top pick for allergy sufferers. This breed came from the Tibet natives and was bred to withstand Tibet’s extreme climate and rugged terrain. It is popularly known for being a loyal, sensitive, naughty, and affectionate family dog. Its small size makes it perfect for cozy living spaces and walking around.

Furthermore, it weighs between 18 to 30 pounds, thus suitable for a household with young children. The better part is that it doesn’t shed tons of fur; this makes it ideal for people with allergies. However, Tibetan requires regular grooming since it has a thick coat. In addition, training a Tibetan dog requires one to be positive and patient.

Fun facts about the Tibetan Terrier

Do you want a lively, intelligent, and obedient dog? If so, then opt for a Brussels Griffon. A sturdy Belgium breed known for its almost-human expression. The early breeds were developed in Brussels in the early ’80s. Brussels Griffon is an excellent watchdog but doesn’t like spending long hours without company.

In addition, its coat is either rough or smooth. A point to note is that rough-coated breeds don’t shed while smooth-coated ones shed seasonally, hence require regular grooming during this time.

Fun facts about the Brussels Griffon

Poodles are among the most intelligent dogs worldwide. They come in three sizes, namely, Toy, Miniature, and Standard. They originated in Germany and are best known for their hunting skills and obedience. On top of that, they are considered non-shedding dogs, although they are fully coated.

Nevertheless, Poodles can thrive in different environments as long as they receive regular and adequate exercising. As much as they enjoy swimming and playing in the water, their life span ranges between 10 to 18 years.

Fun facts about the Poodle

Also known as the Westie, this breed has a friendly and strong-willed personality. Westie originated in Scotland in the 17th century and was bred to hunt rats and rodents who spread diseases and destroyed stories.

The West Highland White Terrier requires patience during training since it has a self-resilient and independent streak. Furthermore, it has a double white coat that sheds seasonally hence the need to brush and trim every four to six weeks.

Are you looking for dogs that will be a perfect match with your children? If so, then go for a Havanese. This dog is obedient, lively, and highly intelligent.

Fun facts about the Havanese

The Scottish Terrier is commonly known for its short legs and shaggy beards. Also known as a Scottie, this breed is charming and friendly thus loves to stay with humans. It has a rugged, dense coat, hence the need for clipping once a month.

Fun facts about the Scottish Terrier

The Irish Water Spaniel is an active and energetic companion. Its dual-tactic nature for hunting and companionship surprisingly makes it an excellent pet to keep at home. Its hypoallergenic coat requires occasional trimming to keep it looking in tip-top shape.

A fun fact about the Irish Water Spaniel

The Cairn Terrier is obedient, small-bred, calm, and a quick learner.  It originated from Scotland and is always jovial. It displays hunting earth dog traits by scaring away rats and foxes. Additionally, it has a medium-long coat and requires weekly brushing and monthly washing.

Fun facts about the Cairn Terrier

If you love farming, then the Bouvier des Flandres will be your perfect companion. It was initially bred to herd cattle near the Belgian town of Flanders. This breed is a loving pet, tireless, and at the same time a watchdog that requires proper maintenance.

The Bearded Collie is an obedient and agile herding dog with a shaggy coat. It is also robust and an excellent companion. However, its long and fine coat makes it necessary to receive regular grooming.

A fun fact about the Bearded Collie

Cirneco dell’Etna is both obedient, friendly, and affectionate. It originated 2500 years ago from Egypt before being transported to the Mediterranean basin by the Phoenicians. The dog has a sleek coat thus does not require regular grooming. Moreover, it is an excellent family companion.

Fun facts about the Cirneco dell’Etna

The Ibizan has a tall and lean body. This dog originated from Egypt and has hunting skills as it can jump six feet in the air. Its affectionate and loyal character makes it a perfect companion for children and the whole family.

Fun facts about the Ibizan Hound

Having originated from Hungary, the Komondor is among the group of muscular and large non-shedding dogs. It is obedient and suitable for guarding sheep and goats. However, it requires walking exercises as it gets inactive during adulthood. What’s more is the dense, protective white corded coat.

Fun facts about the Komondor

The Redbone is well known for its flashy red coat. Its agility and high speed make it a good hunter. The most outstanding quality about it is that it is friendly at home but aggressive in the field. It requires occasional grooming because of its slightly coarse coat.

A fun fact about the Redbone Coonhound

It is a Mexican breed that comes in three sizes, Toy Miniature and Standard. Each size has two varieties, either coated or haired. It was initially bred to guard homesteads from evil spirits. Moreover, it a watchdog and also a great family companion.

Fun facts about the Xoloitzcuintli

Many people desire to become dog owners; but, allergic reactions caused by canines hinder their choices. However, there are dog breeds suitable for people who have allergies. One thing to note is that getting hypoallergenic dog breeds isn’t the only solution. You also need to groom your pup and avoid touching other dogs.

All the dogs mentioned above are perfect for people with allergies. But the Tibetan Terrier will give you the best experience. This is because it is obedient, loyal, and most of all, a watchdog.