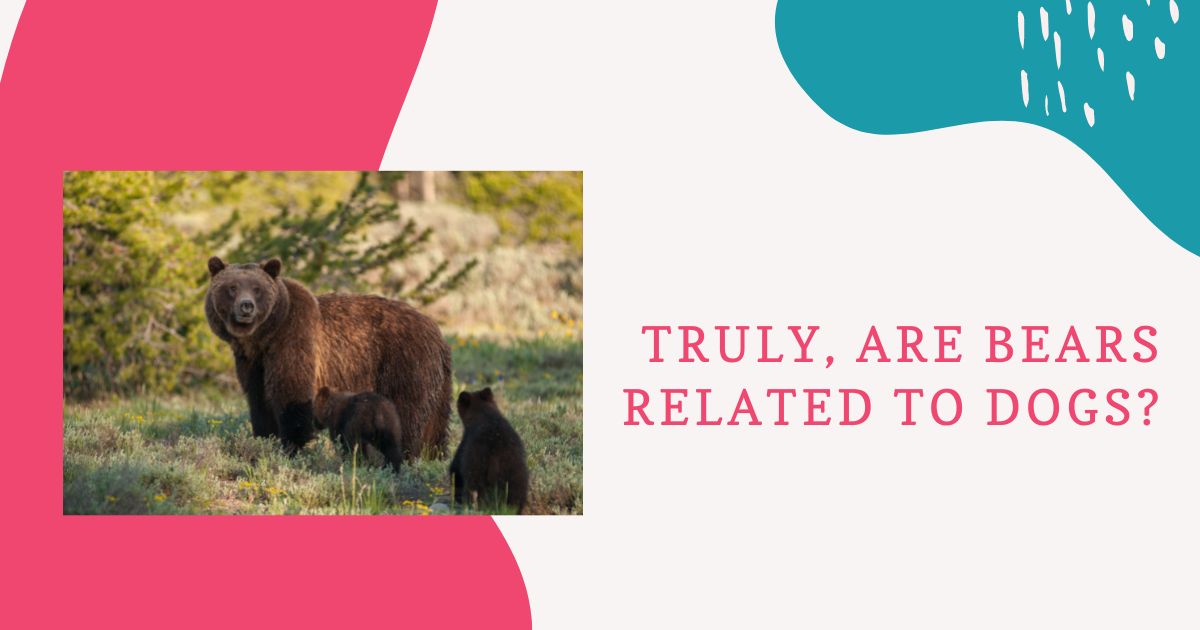 Are bears related to dogs, or is a bear canine? The answer is no, bears are not canines, but dogs are. Although most people think bears and dogs are both canines because of their physical resemblance. Canines are dog-like animals belonging to the Canidae family, and bears belong to the Ursidae family.

Are Bears Related to Dogs?

Are bears and dogs related? Dogs and bears are not directly related; they belong to different biological families. Dogs belong to the Canidae family, consisting of coyotes, foxes, and dingoes. In contrast, bears belong to the Ursidae family with species such as pandas, polar bears, and other bear-like animals.

Dogs and bears have several similarities and characteristics, even though they are not genetically related.

Are bears more closely related to cats and dogs? Both bears and dogs belong to the Carnivora group but have different evolutionary trees making them resemble dogs more than cats.

Some people have studied different species’ interrelatedness, and the most popular is fossil evidence.

Important Ways to Look at Evolutionary History Between Dogs and Bears

There is also a deeper distinction in the Carnivora order:

The facultative carnivores did more than hunt other animals for food; they changed to upgrade their lifestyles.

The facultative adapted easily and developed a keen sense of smell for hunting, scavenging, and obtaining specific meat traits such as running fast and sharp teeth for tearing prey.

There are two suborders of large Carnivora orders.

Feliformia: These species had a cat-like appearance, then dog-like species, and later felines. Domesticated animals such as lions, cats, and tigers belong to this group.

Caniformia: These creatures evolved into dog-like animals, placing the bears in this subgroup. The canifromia had non-retracting and long snout claws, which are still evident and up to date. In the caniformia group, other creatures, such as red pandas, skunks, and raccoon seals, also have similar traits.

Bears and dogs had a strange grouping even before the evolutionary chain: they had a common ancestor who existed 42 million years ago. Before the Carnivora order, the miacidae family ruled the supreme.

Miacidae family lived in the tree, had carnassial teeth, survived on meat only, and were very small with long tails. According to Evolution, one mammal from the miacidae group had a DNA test, and the result showed that they were ancestors of bears, lions, tigers, and dogs.

DNA allows us to take time to see how different creatures are related. If two species have similar DNA, they probably have a close ancestor.

The Definition of Taxonomic Classification

Taxonomic classification is the scientific study of grouping animals with related characteristics. Learning and understanding the grouping system humans use to know the relationship between different animal species is important.

According to taxonomic classification, specific animals are into groups of more categories from the broadest grouping known as the kingdom. When determining animal classifications, you consider their habitat, diet, physical traits, and behavior.

For example, dogs belong to the Canidae family, which has animals such as foxes, wolves, and coyotes. Animals in the Canidae family have long jaws, non-retractable claws, pointed ears, and less-specialized teeth.

When you look at the dog’s features and compare them to the feature of a bear, there is a clarification that bears are not canines. The bear’s genus belongs to the Ursidae family; examples of other animals in this group are raccoons, pandas, and weasels. These animals have round ears, snouts, and plantigrade feet.

A Table Chart To Show Taxonomy of Bears and Dogs

The Most Recent Shared Ancestor Between Bears and Canines

According to the evolutionary, bears and dogs share a common ancestor. The most recent shared ancestor between dogs and bears is micacids. There is a belief that miacids existed between 32 to 62 million years ago and were lucky to survive for at least 28 million years.

There is a belief that miacid mammals evolved into the modern basis from the Carnivora order, a suborder of Feliformia and Caniformia groups. They had weasels and martens looks while some lived in the trees and others on the ground.

Miacids are the base for all modern carnivores, and they would prey on anything smaller than them. As they were spreading, miacids began to specialize in their ecological niches. In Africa, felines developed an abundance of meat and were allowed to evolve into super predators, which are now known as leopards and lions.

In North America and Europe, a more diverse diet led to more omnivorous animals that are now dogs, bears, and otters.

If you have a spot for dogs resembling bears, plenty of them have furball, fluffy fur, and dense and ursine-like appearance. There are a few notable dogs that look like bears.

Akitas is a powerful canine and large Japanese breed that weighs approximately 85 to 130 lbs (38.55 to 58.97 kgs). Akita’s face resembles a bear, but the rest of its body is sleek and supple. Akitas have brown and white fur with a unique brindle pattern and curly tails on their backs like the bears.

Akitas are courageous, loyal, and independent, making them look more like bears than dogs. They can be aggressive if they are not well-socialized, and it is important to consider this before keeping them in your home.

Bush Dog is a south American breed with an uncanny resemblance to bears. Most people panic when they see bush dogs; they mistake them for bears and kill them. Bush Dogs are not large; they weigh approximately 11 to 20 lbs (4.9 to 9.07 kg) but have strong personalities in small frames. They are not dangerous but preferred after the first sign of hostility.

Bush Dogs have reddish brown or gray coarse fur, ears set far back on their heads, and long snouts like the bears. Bush Dogs are known for their curiosity and activeness and are the most playful breeds.

Caucasian Dogs are among the biggest canines in the world, with a bear-like weight of approximately 220 lbs ( 99.7 kgs) and 34 in (86.36 cm) height. Caucasian Dogs have a grey, white, or tan-dense double coat, but they also require brushing and grooming a few times a week.

A Caucasian Dog is a rare giant breed that is brave, large, intimidating, overprotective of its household, and can be aggressive to other animals or strangers. They need early training, and socialization is a must.

It is not a good idea to rare Caucasian Dogs at home unless you are confident with the training.

Chow Chow is originally from china, and the aim of breeding them was to hunt and guard. Chow Chows are the closest types of dogs to resemble bears. Chow Chows have big and thick coats, making them look like bears, and if you are unfamiliar with them, there is a high chance of mistaking them for golden bear cubs.

Chow Chow Dogs have a blue tongue which is a genetic mutation, sturdy bundles of puff, deep-set eyes, a mane of hair around the face, short noses, and big and muscular, weighing approximately 60 to 70 lbs (27.22 to 31.7 kgs). Chow Chows tend to shed a lot and need grooming and brushing once or twice a week to keep them clean.

Chow Chow Dogs have furballs, and they require little running and a moderate amount of exercise. Introduce them to children and other dogs for obedience training and easy socialization when they are puppies.

There is a belief that Chow Chow Dogs are among the oldest dog breed and make a perfect watchdog, but they can be a little wary and independent and are not ideal for a first-time dog owner, but they adapt easily to apartment living.

Great Pyrenees dogs are friendly, with thick white fur coats from the Pyrenees Mountains. Breeding Great Pyrenees Dogs were to protect flocks from predators such as bears, wolves, and badgers. They are gentle giants unless the flocks are under attack.

Great Pyrenees are large, weighing approximately 100 to 130 lbs (45.35 to 58.97 kgs), and resemble polar bears. They are great and affectionate with kids and those they love and make fantastic family pets and protectors.

Great Pyrenees are naturally dirty, and their fur tangles a lot, but a weekly brushing can work, and they could be better for hot climates or apartments.

Leonberger is a gentle giant with a lush double coat that makes him look extra cuddly, and its furry tail adds an ursine resemblance. Leonberger originates from Germany, whose purpose was to hunt, herd and pull carts.

These bear-like dogs weigh about 130 to 170 lbs (58.97 to 77.11 kgs), setting them apart from other breeds. A Leonberger’s great size and calmness make it the perfect mix of bear and dog. Leonberger is a powerful, loving, and loyal family pet.

Due to their oily and dark brown fur, Newfoundland Dogs can repel in water and maintain body heat, and the webbing between their toes gives them extra traction when swimming.

Canada’s icy Newfoundland and Labrador provinces mostly breed this type of dog as maritime working dogs. They also retrieve fish from the water and are fearless with life-saving abilities.

Newfoundland Dogs are calm, gentle, and great companions and have a sweet deposition toward children. They need moderate exercise.

Pomeranian dogs are small, lovable, and friendly, weighing approximately 3 to 7 lbs (1.36 to 3.18 kgs). Pomeranian dogs love children and like to exercise during the hot season. They have a luxuriously fluffy thick coat that also sheds and requires brushing several times a week.

Pomeranian dogs are not perfect for homes with rambunctious kids.

Samoyeds are fun-loving, cheerful, sweet, and active dogs from Siberia and the Arctic Tundra of Northernmost Asia. The purpose of breeding Samoyed was hunting and herding reindeer.

Samoyed weighs approximately 35 to 65 lbs (15.9 to 29.5 kgs) and is friendly to people and other animals; they do not do well when you leave them alone for a long period.

Samoyed has a thick white coat that makes them look like clouds and a curly tail on their backs to withstand the coldest temperatures. Samoyed does well in homes that are air-conditioned during summer.

Their coat tends to shed a lot, and they require brushing several times a week; grooming them can be tiring, but their cute smile makes it worth it for a dog lover. Samoyed has an uncanny resemblance to polar bears, and you can use them as sled dogs similar to bears.

Tibetan Mastiff is a grith, fluff, and most probably the most menacing bear-like dog. Tibetan Mastiffs are big and muscular animals that weigh approximately 160 to 200 lbs (72.5 to 90.7 kgs). Originally the breeding of Tibetan Mastiffs was to guard and hunt, but now they are playful, protective, and loyal companions to their owners.

Tibetans have a double heavy coat and feather duster tail similar to ursine cousins, making them resemble bears, especially in the wild. They have a big heavy fur coat around the neck and ears giving them a little mane.

Tibetans are light shedders and need brushing and grooming several times a week to keep their fur clean, and their furry pays against tracked-in dirt. It is vital to keep them indoors on hot days. Tibetans also closely resemble hibernating bears due to their calm disposition.

Can a Dog and a Bear Mate?

Dogs and bears cannot mate; they have different genetic makeup. Bears and dogs have different numbers of chromosomes; dogs have 78, while bears have 74. Interbreeding and cross-breeding these two animals is not possible.

Bears and dogs may have similar characteristics, but they are not related. These animals belong to different evolutionary families but belong to the mammalian order. They are distant relatives; they only share an ancestor that existed more than 32 million years ago.

Dogs are domesticated for human companionship, while bears are wild animals that can be dangerous if they are under threat.