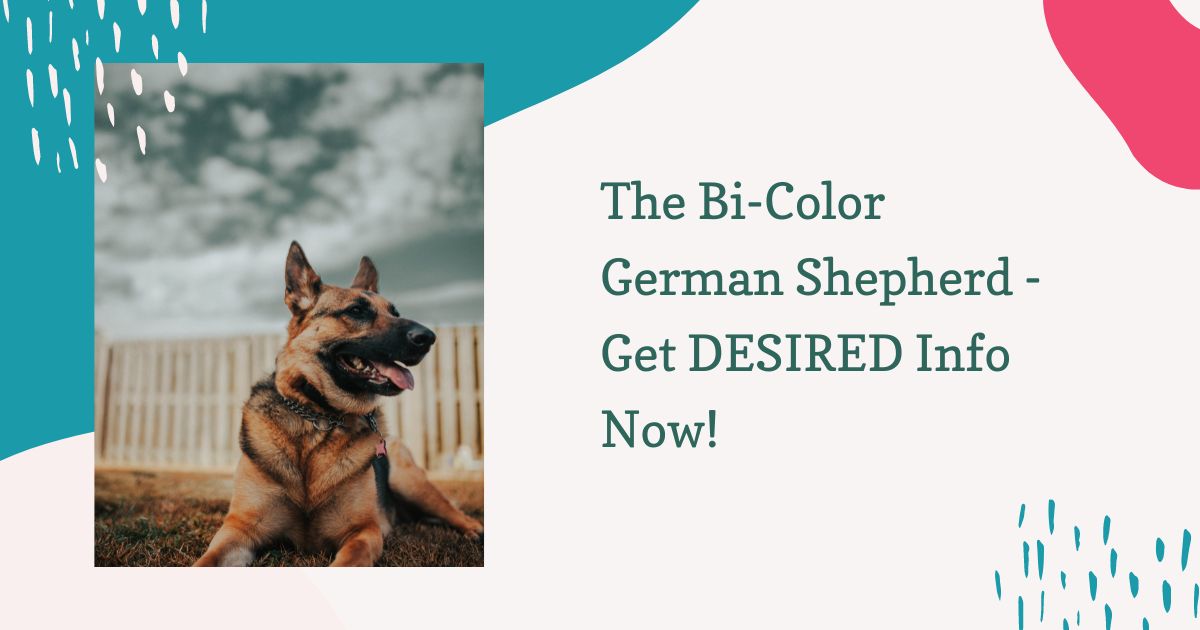 What is a Bi-Color German Shepherd?

A bi-color German Shepherd has a tan and black color. The black color takes more place on the dog than the tan color creating more dominance. Since almost the dog’s whole body is black, only a few sections, such as the neck and the chest, dominate with the tan. Some German Shepherds have a tan color on the neck as well.

A combination of black and tan colors brings out a bi-color German Shepherd. In this case, the black color of the dog has more dominance than the tan. A wide section of the dog’s body is black, while the few sections take the tan. It may be difficult to distinguish between two German Shepherds, especially young ones.

The brown color under the tail is the main indication of whether the dog will grow into a bi-color dog. When a bi-color German Shepherd puppy grows to its full size, the ratio of the black to tan color is usually 9:1. On several occasions, people may mistake the black German Shepherd for the bi-color one. Be careful noting another color to avoid mistaking it.

The shades of white, cream, and black make up a German shepherd dog’s black and cream color. The cream section of the fur may appear like silver on some occasions, but a closer look reveals the white. This color is among the most popular German Shepherd colors. Do not mistake this dog for an entirely cream German Shepherd.

The cream color may usually vary from one dog to another. Some dogs may have an off-white cream color, while others don’t. However, most black and cream German Shepherds usually have a metallic silver-like coloring on the cream section.

The lower section of all-black and cream german shepherds is usually cream. The top area of these dogs is always black. The black creates a special dominance. The black section of the German Shepherd may also come in several shades. It may be common to see different hues in the main black areas.

You may find black German Shepherds with some other color sheds. However, the color shades on the black dogs of this kind are unlike the other colors. The shades may only take small sections, allowing the major parts of the dog to remain black. For this reason, a large dominance of the black color allows easy dog identification.

German Shepherds of this color are not something you can stumble upon any day. The red and black German Shepherds are attractive to almost everyone. If you come across a black and red German Shepherd, you may notice a dark mahogany red with patches of black on the coat.

The colors on the coat are quite shouting and are so easy to spot. In other words, this German Shepherd looks like a brindle of merle. The black color of this dog is majorly on the back tail section. You may also spot black on the bottom, face, and tail. Different German Shepherd dogs may have different shades of black on other sections.

Unlike in a tan German Shepherd, in this dog, the tan fur may come in deeper shades and spread to different parts of the German Shepherd. The tan fur may form other hues that appear like silver on other sections. It is easy to spot the silver-like tan, mostly on the edges of the fur.

In some German Shepherds, the black color may vary in range. Some dogs may portray a dark gray color, but the fact remains that the color is black. Other dogs may give out a much darker black color.

You may also spot some German Shepherds with shades of black on the fur. Remember that despite different black shades, the fur is still black. You should be keen when spotting the colors not to confuse the black shades with other German Shepherd colors.

The black color always takes on the upper section of the dog. However, the black only occupies half of the German Shepherd’s full body. The black and silver combination makes the German Shepherd look more exotic than normal. Due to the growing popularity of these dogs, breeders have been breeding them in large quantities.

Due to the recessive genes in these dogs, you may only get a blue German Shepherd through a special breeding process. Some people usually believe that the German Shepherd’s blue color comes from illnesses or biological conditions. However, the belief that the blue hue in German Shepherds is a sign of disease is incorrect.

The flawed belief comes because some other dog breeds usually indicate a health problem through the color of the fur. Some dogs that signal health issues using the fur color are French Bulldogs. You must remember that in German Shepherds, the fur color never shows any illness sign.

Being super rare and unique in appearance, you should be ready to dig so deep into your pocket when thinking of getting yourself a blue German Shepherd. The scarcity of this dog always keeps the price hiking over time. The blue German Shepherd’s price may always vary from one breeder to another.

This dog is one of the richest bi-color German Shepherd dogs. On other occasions, people may term liver German Shepherds as brown. Always keep in mind that the liver and brown color is almost the same when it comes to this dog. The natural liver color may spread throughout the body in most cases.

The liver color may begin to get lighter when it comes to various sections of the dog. Some sides may get warmer as the liver touch spreads out. You may also spot hints of other colors in addition to the liver color on the coat.

Another beautiful factor is that German Shepherds with the liver color are also most likely to have a pair of beautiful amber eyes. The amber eyes come as a result of pairing two genes together. The American Kennel Club recognizes this type of German Shepherd and terms it as one of the most beautiful, making it more popular.

Many people confuse the gray German Shepherd with the blue and black ones. The silver German Shepherds may also look a little like the gray ones, but in a real sense, the difference in these colors is quite visible. The gray color spreads through the German Shepherd’s coat due to a dominant gene in both parents.

The dogs with this color mostly also have a bright blue pair of eyes. The combination of the color of the eyes and the coat color brings out a beauty to admire. Once these German Shepherds mature, their bright blue eyes turn light brown. The American Kennel Club recognizes this dog, making it popular.

The white color spreads across the German Shepherd’s sides, making it attractive. Unlike the other German Shepherds with other colors, which may be hard to distinguish, the white variation is quite simple. To this date, white GSD dogs are quite common and not so hard to find.

These dogs have become common since their genes are recessive. When two white GSD dogs naturally mate, it is automatic that they will have white puppies. One major problem about the white GSD dogs is that the American Kennel Club does not recognize this breed.

The lack of recognition makes some people see ownership of the white German Shepherd dog as a weakness. The most positive feature of white GSD dogs is that they have longer coats than most other GSD dogs.

The rest of the hair is usually mostly gray. In other German Shepherds, hair strands may take other colors, such as golden or tan. It may be very difficult to spot two sables having the same color. The difference in their colors comes because of the various colors of the other hair strands. These German Shepherds are popular as black and tan.

When it comes to one of the rare variations of the German Shepherd colors, this color fall right through. Panda color makes the GSD dogs appear exactly like the panda itself. The black and white colors spread artistically throughout the dog’s body just the same way as in the panda’s body.

Due to the color, some people usually believe that this dog is a mixed breed. However, this German Shepherd dog does not have any breed mixture inside. A rare genetic mutation is responsible for bringing out the German Shepherd dog with these special panda appearances.

In most cases, if the father has a black and tan color and the mother has pure black, a German Shepherd with the panda color gets to be born. The father and mother’s genes usually make the puppy German Shepherd have a few white spots around the body. The large section of the body always remains black.

The German Shepherd dogs with this color are quite amazing and admirable. The light lilac color spreads throughout the body, creating a feminine look. The sad part is that the American Kennel Club does not recognize this breed, so they cannot participate in shows.

The main reason why AKC does not accept this breed is that they consider it a fault due to the color. However, many people in different communities find this breed attractive, especially in the U.S. One of the main reasons why people love this dog is that it looks less threatening. The Isabella color makes this breed appear friendly, especially to the kids.

Isabella Geman shepherds are rare. Breeding the liver and blue German Shepherds brings out the Isabella breed. This dog’s color is appealing and may make you stand out regarding dog matters.

Despite the AKC approval, it may be difficult to spot bi-color German Shepherd dogs at shows and events. On the other hand, it is relatively easy to spot the hued dogs in large numbers. Some people accept the hued dogs more than the bi-color ones, especially during events and shows.

Is the Bi-Colored German Shepherd Rare?

Even though these dogs are rare, they still do not qualify as the rarest. The gray, white, red, and blue come in to take the crown of the rare breeds of German Shepherds. Some people may confuse the bi-color German Shepherds with the black ones.

The Causes of a Bi-Colored Coat

When you breed the black, sable, or tan together, there is always a high chance of having a bi-color German Shepherd. The whole theory is all about genes. When black, sable, and tan are present in the parent dogs, it is definite that a bi-color puppy will be born. The results come since tan and black are the most dominant genes in this nature.

The Cost of a Bi-Colored GSD Puppy

The cost of a bi-color German Shepherd puppy mostly depends on the breeder. In most cases, the price of these puppies may range from $1,500 to $3,000. This price may also rise depending on different market factors. Other breeders may sell their GSD puppies for the same price as most regular Shepherds.

The non-usual coat may make some breeders sell their German Shepherd puppies for a much higher price. You must prepare to dig deeper into your pocket to own this puppy. The price always stays the same.

You must remember that these dogs could do better in shows and competitions. The price is only for the looks. If you love fancy and attractive, these puppies’ cost should not raise any alarm.

One Last Thing to Remember

From the unique coats to the attractive appearance, bi-color German Shepherd dogs have always stood out in looks. This breed always attracts almost all dog lovers despite having a few setbacks, such as having a heavy price tag.