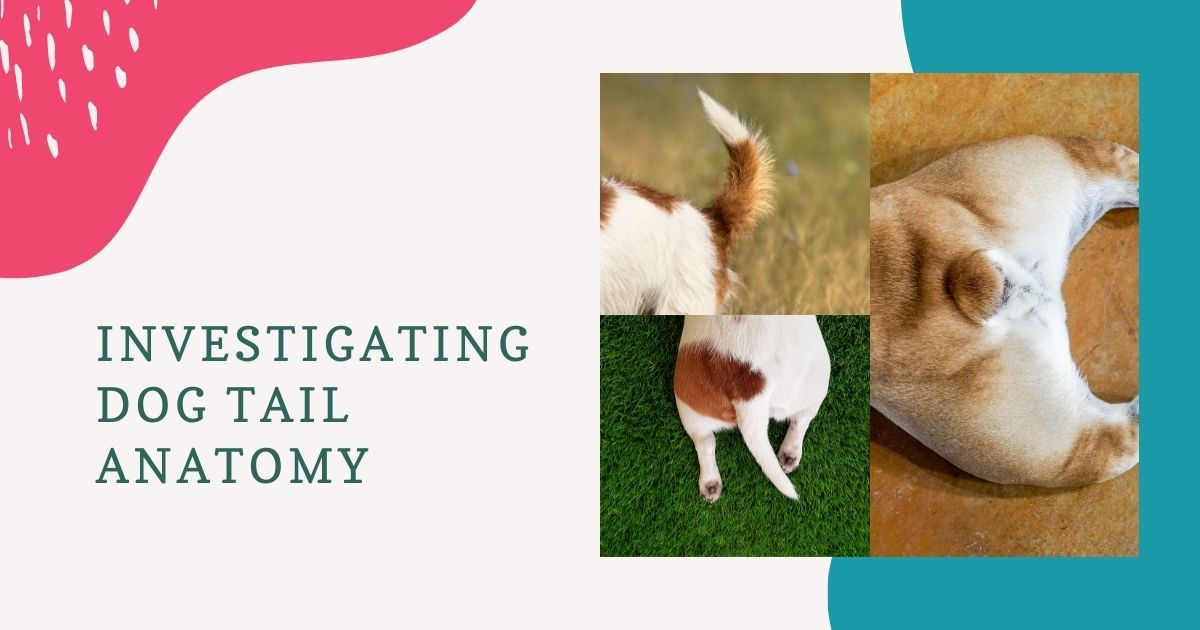 Why Do Dogs Have Tails?

Dogs’ tails are unique in the animal kingdom. They are the only mammals that have them, and they come in various shapes and sizes. If you have ever thought about dog tail anatomy, you must have wondered why they have tails.

There are various reasons, but the primary purpose is to communicate with other dogs. Tails are an essential part of a dog’s anatomy, and they serve several essential functions.

The primary purpose of a dog’s tail is to communicate with other dogs. Tails can express a wide range of emotions, from happiness to aggression. This is why dog owners need to be aware of their dog’s tail posture and movements.

Tails also play a crucial role in balance and locomotion. For example, dogs use their tails to help maintain their balance when running or jumping, and they use them to steer while swimming.

Can Dogs Control Their Tails?

Do Dogs Have Bones in Their Tails?

The bones that make these tails are called vertebrae. Ligaments connect these bones, which allow for flexibility of the tail. You can feel these vertebrae if you run your hand from a dog’s rump up towards the tip of its tail.

The closer you get to the tip, which is called the distal portion, you’ll notice that there are places where you can feel more than one bone at once. This is because this area consists of more than one vertebra, which is also stiffer.

Just like us, humans have neck bones (cervical vertebrae), dogs have tailbones (caudal vertebrae). These bones help protect the spinal cord as it runs through the dog’s tail.

So, next time you’re petting your puppy, take a moment to feel those tailbones! They might surprise you, so if you wanted to know.

Can Dogs Break Their Tails?

Dogs can break their tails. The most common dog tail injury is when a dog jumps out of a car and lands on its tail. This type of injury is called a “hyperextension” or “tail whip.”

Other causes of a broken dog tail include being hit by a car, fighting with another animal, or falling. In addition, a broken tail can be very painful and may require surgery to repair.

If your dog’s tail has an injury, take them to the veterinarian immediately for treatment. Should you suspect that your dog has a broken tail, here are some signs to look for:

Your veterinarian will perform tests and take x-rays to determine any other injuries resulting from the broken tail dog. If you notice these signs, get emergency veterinary care right away!

There’s a lot more to learn about dog anatomy! For instance, did you know that some dogs can wag their tails so hard they start spinning around? It’s true! Let’s have a look at other fun facts about dog tails.

Dogs use their tails to communicate with other dogs and humans. Regarding dog tail meanings, a wagging tail means a dog is happy and friendly, while a stiff or held-back tail may mean the dog is uncomfortable or feeling aggressive.

Tails also help dogs balance while moving. For example, the position of a dog’s tail can tell you whether it’s about to start running or leaping.

Dogs will often wag their tails when they’re getting petted because it feels good! Tails also play an essential role in regulating the body temperature of dogs. Dogs cool themselves through panting and sweating through their paw pads, but they can also use their tails to control heat flow.

When a dog is hot, the blood vessels in its tail will dilate to release heat and cool it down.

The shape of a dog’s tail can help you figure out if your dog may be at risk for particular health concerns.

Breeds like corgis and bobtails have short tails because they result from genetic mutations that are sometimes associated with other serious medical issues.

Dogs with longer tails may be more prone to dog tail infection or injuries like broken bones or sprains, so keep an eye on them!

Tail-chasing behavior is typical among dogs separated from their mothers before weaning age.

Still, it can also occur when puppies get overstimulated by playtime and playmates during this critical time (between eight and twelve weeks old). If your puppy is always chasing its tail, it’s best to take it to a qualified behaviorist for help.

The General Structure of a Canine Tail

Tail bones, or vertebrae, are the individual building blocks of the spinal column. There are typically 33-34 tail vertebrae in dogs, significantly fewer than the number found in humans (44). The tail vertebrae are attached to muscles and ligaments that allow movement and flexibility.

Extending from the brainstem, the spinal cord is a long nerve bundle responsible for relaying messages between the brain and other body parts.

The spinal cord passes through a hole at the base of the skull and continues down through the neck and back. It branches off into smaller nerves along its length that innervate different body parts.

The tail has different muscles, including the longissimus dorsi, iliocostalis lumborum, and biceps femoris. These muscles attach to the vertebrae and ribs and allow for movement of the tail. The muscles are supplied with blood by arteries that run along the spinal cord.

Ligaments are bands of fibrous tissue which connect bones to other bones and help stabilize joints. For example, several ligaments connect the vertebrae and the pelvic bone in the canine tail. These ligaments keep the tail in alignment and prevent it from pulling out of the joint.

There are several tiny blood vessels in the canine tail, including arteries, veins, and capillaries. These vessels supply the muscles with oxygen-rich blood and carry away carbon dioxide. The veins also play a role in thermoregulation, helping to keep the body temperature stable.

Nerves are thin threads of tissue that transmit electrical signals between different body parts: Numerous nerves in the canine tail, including those that innervate the muscles, skin, and internal organs. These nerves help to control movement and sensation in the tail.

By understanding the different structures that make up the canine tail, we can better appreciate its complex anatomy and how it functions. When troubleshooting problems with a dog’s tail, knowing which structure is affected to administer appropriate treatment is essential.

What do Dogs Use Their Tails For?

You may have noticed that dogs wag their tails when they are happy. However, this is not the only use of a dog’s tail.

Dogs can also communicate through their tails in many other ways, such as expressing fear or aggression and keeping balance while running.

We all know that dogs will wag their tails if they are happy to see you or if they want to play with you. Dogs often do this at feeding time. They will be very excited about eating!

If a dog is barking at something it wants to chase but cannot reach (for example, outside your house), it will wag its tail vigorously from side to side because it wants to play with that thing. The faster the tail wags, the more excited a dog is to see you or something else!

Dogs can also communicate through tail positioning in many ways. For example, if a dog’s tail appears between its legs, it means that the dog is scared of something and wants to hide from it.

This might be because another animal has been aggressive towards them recently or because of an accident (like being yelled at by someone for doing something wrong).

Dogs are often put into situations where they feel unsafe and will try their best not to get into trouble again next time around, so they don’t have these bad memories anymore! They’ll even go home early just so long as nobody sees them.

On the other hand, if a dog’s tail is held high, the dog feels very confident and happy. This might be because it just did something great like catching a Frisbee or going for a long walk and exploring new territory.

Dogs also do this when they meet new people or animals – it’s their way of saying, “I’m friendly!” So if you see a dog putting up its tail, try to pet it! It’ll probably love the attention.

When a dog’s tail is between its legs, it usually feels scared or aggressive.

For example, if a strange animal walks into the room where the dog is, it will probably put its tail between its legs to try and make itself look small and unimportant. This is because the strange animal might see it as a threat and attack.

Why Do Some Dogs Chew Their Tails?

There are several reasons why dogs might chew their tails. For example, some dogs may chew their tails out of boredom, while others may do it as a way to self-soothe or relieve anxiety.

Certain medical conditions can also cause dogs to chew their tails, such as flea allergies or skin irritation. If you notice your dog chewing its tail excessively, be sure to take it to the vet for a diagnosis.

Tail-chewing can signify an underlying health problem, and it’s essential to get it treated promptly.

If your dog is chewing its tail, there are a few things you can do to help prevent it from doing so. First, play with your dog a lot, and make sure it gets plenty of exercise.

In addition, if you notice that your dog is anxious or stressed, try to provide it with a calm and relaxing environment. You can also speak to your vet about giving your dog anxiety medication if necessary.

If you can identify why your dog is chewing its tail, you can take steps to correct the problem. By helping your dog overcome this bad habit, you can help it live a happier, healthier life.

The Tail End of The Story

There’s no doubt that dogs use their tails to communicate in many different ways. Tail wagging, positioning, and chewing can all mean something different depending on the dog’s mood or situation.

If you notice your dog doing any of these things, take a closer look and see what it might be trying to say! With a bit of patience and effort, you can help your dog overcome this habit and live a happy, healthy life. We hope you enjoyed this article on dog tail anatomy.

Spread the word if you did!